What on earth is DEA?

Okay, So I've talked about the design process a little bit. Now I think it's time to talk about DEA! This is something I've been working with (on and off) for about 4 years.

To put it simply, DEA is a platform game that focuses on quick reactions and super-tight controls which assist in free-running your player all over the place. It draws inspiration from the golden classics such as Metroid and Castlevania, while throwing elements of WarioWare, Ratchet and Clank, Super Smash Bros, Hotline Miami and Dota 2 into the mix. The result is rather insane! As Drug Enforcement Astronauts, you must visit different planets and rid the galaxy of the evil space cartels who rule with an iron fist. Everything you do in this operation is "under the table", meaning that the politics and paperwork go out of the window. You're given the agency to choose what you deem ethical, whether that involves diplomacy, arrests, or good-old smashing doors down, guns blazing! Want a shady slice of the profit? Sure! Are you a self-righteous do-gooder? That's fine. Are you a violent psychopath who wants to murder all who oppose you? We've got you covered.

The game plays out best with friends - it's all about the local 4-player co-op! These are some of the agents you will play as:

Before each match, each player is given an equipment screen including all the loot they've pillaged throughout the campaign. Players are given 4 item slots (one always contains the scythe (which is vital)) and can use any combination of items as they please. I must stress that there really will be an awful lot of items to work with. Here's a few of the prototypes: 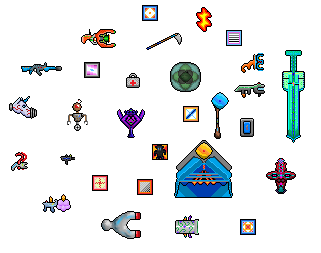 Items are divided into 5 categories:

It's worth noting that I've given each weapon three firing modes and the game is designed that way! Everything is better with 3 firing modes :D

I want to then start pushing the idea of asymmetric multiplayer, which is rarely seen nowadays. The premise is that each player can choose a loadout of 4 items before entering a mission, while all having hugely diverse and polarized roles. All of the players are quite welcome to go in guns blazing, but if you really want to maximize your chances of survival against the big-hitters, you'll need to mix up your game. I'm trying to encourage players to try different classes, and would like them to all be equally fun with a sense of agency! This means that you can mix things up, either applying yourself to recon and stealth, speed, finesse, gadgetry, electronics, diplomacy, medicine, or any other mixture of classes.

I want to create a blend of awesome teamwork, where one player can hypothetically scan rooms for hostiles, hack security systems and rewire defences, another can handle finances and diplomacy, another player could report sightings from HQ, or load up on brutal firepower and Judge Dredd (Yes, I used his name as a verb) the whole place, striking fear in the hearts of the astro-narcs.

The game is still heavily in the early stages of development, and much of the art is acting as a placeholder until it can be re-done. Here's a couple of early development videos. My proudest achievement at the moment is the responsive and diverse free-running system which is easy to learn and hard to master (Videos can be viewed in HD 60fps):