The engine is in its early stages, but has been designed to be cohesive and support constant future additions. It's also worth mentioning that the art will be undergoing huge changes to make it all look more consistent. This blog is more about the design on the game. Below is a list of different game modes I'd like to or already have put in:

1.) Campaign Mode (Single/Multiplayer):
This mode is a given! It will consist of a large overworld map with level nodes scattered about. It will have RPG-like progression and comprehensive story-line, allowing players to strengthen up over time and unlock new gadgetry and weapons. I'd like to also provide some freedom, meaning players can go at the harder levels early on if they so wish (and have a death wish). 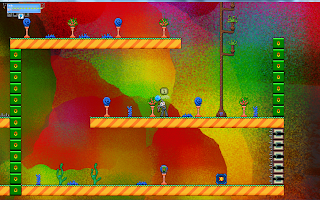 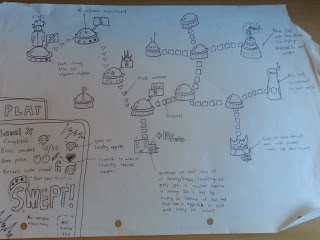 2.) Dungeon Mode (Single/Multiplayer):
This mode is going to throw players into a roguelike setting that we all have that love-hate relationship with. Having no overworld map, levels will interconnect into a huge MetroidVania labyrinth of semi-random levels, where players can get lucky and find super-exploitative combinations of gadgets and powerups, or alternatively, scrape through the maze, barely surviving each vicious encounter! (Think Binding of Isaac) (This mode hasn't been started on yet, and the picture below is just a CastleVania map) 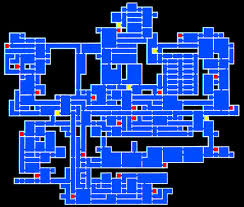 3.) Harvest Mode (MOBA mode) (Multiplayer only):
Players will be separated into teams with their own bases at their side of the map. Each team starts with pathetic weapons and a student budget, constantly trying to outwit the other time in fights, while also fighting mobs of enemies jotted throughout the map. Over time, players can farm up and gain more money and crafting resources, which can be deposited into an ATM at their base and shared with team mates (if wanted). The bases will contain shops, so players can get progressively stronger in their effort to destroy the opposing team's base. 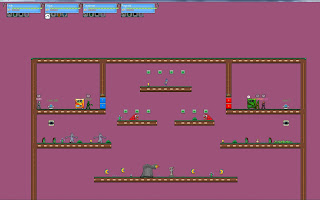 4.) Deathmatch (Multiplayer only):
This will play out in an Unreal Tournament kind of way. Players don't customize their loadouts. Instead, the level is jotted with spawn points for weapons, and the players will be locked into a frantic, fast-paced fighting session, where only the twitchiest and most opportunistic of players survive!

5.) Tactics Mode (Multiplayer only):
Tactics mode will work as a turn-based strategy game. There will be a map with points of interest which generate currency and perks over time. The catch is that each tile, when landed on, will throw the player into a normal game scenario, where they must destroy the defences and hit the capture point to own that piece of land. If players land on the same tile, they will be pitted in a versus match to determine who gets to own that piece of land. Both players accumulate money over time which can be spent of strengthening their agents! 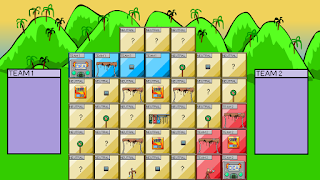 6.) Ships Mode (Multiplayer only):
This is the mode that I'm most excited about finishing! Each player will be given a few minutes to use the editor to create their own base with their own defence systems and navigation. Once both players have create a base, the two bases will be placed inside ships, which both land on the same planet at opposite sides, and pitch the teams against each other. This will result in levels with custom bases on each side, connected together with a randomized world in-between. Players will have to micro-manage the defence of their ship's control room, while also trying to infiltrate and destroy the opposing team's ship.