Hello again! My thanks again if you're taking the time to read this. In this post, I'll be talking a little bit more about the design choices I made with my game, and also just giving a little introduction. So, without further adieu, I present to you:

Well, there's not much on show here. It's just a little concept art! After drafting up all kinds of ideas on paper with some uni flatmates, I finally found the time to start converting it into art. I'd considered all different mediums of art styles, but I decided to keep pixellated sprites and give them some bold, black outlines, to hearken back to the old days of 16-bit gaming. Of course, we're no longer in the 16-bit era, and this gave me all sorts of freedom to mix some really outlandish colour palettes together. I generally find that just making some screenies and conceptual art really helps drive you on, especially with the early stages of development.

Personally, I like to keep old versions of my projects so I can see my progress, so matter how small that progress may be. In an ideal world, I've always wanted to make a game like Wind Waker:

Wind Waker has a beautiful and immersive setting that draws players right in with its accessible and beautiful cel-shaded graphics and open world. I couldn't start with something like this, though. I mean, look at it! I'd need my own development team of 3D artists, conceptual artists, character designers, 3D animators, etc. Not feasible, but it's certainly something to consider in the future if I ever get the time and resources required!

I opted for a 2D platform game for a few reasons:

Let's go into these reasons with a little more depth:

1.) 3D games are where it's at. There's no doubt that the vast majority of major titles these days are made in 3D at the very least. I suppose this is because the vast majority of people opt for realism and immersion. With the imminent rise of more powerful gaming platforms, this is pretty much expected to happen. However, more processing power doesn't just mean we should focus on graphics, and I think I, along with a large fan-base of retro game enthusiasts, appreciate that this extra processing can go into many other things besides fancy graphics. More power means we're given the freedom to create complex mathematical functions, boost up the amount of things going on, and also create bigger worlds, alongside a plethora of all kinds of other things. With this in mind, all my focus is going on creating a GameSpace which can support hundreds of props, monsters, bullets, traps, and more. Also, 3D can hinder some game genres. In a 3D world, you can see around your player, or from your player's perspective (in a first-person game). In a 2D world, you can see for miles in all directions and use this awareness to plan your next move. For the type of game I'm making, this is critical.

An example of 3D actually removing agency and meaningful decisions from the player can be applied to the stealth game genre. Does making a game 3D automatically make it better? Well, a common complaint and design constraint with developers comes along with stealth games. Stealth games can be brilliant, but they must be designed carefully, as it is all too easy to turn your audience right off! I could re-hash everything this guy says, or you could just watch a much better version of what I could possibly write here:

(Also, PLAY THIS GAME if you haven't already!)

2.) This is an interesting one. I originally planned on making a Zelda-style game with a bird's eye view, which can still be created in 2D. However, every sprite would need to be animated facing three different directions: 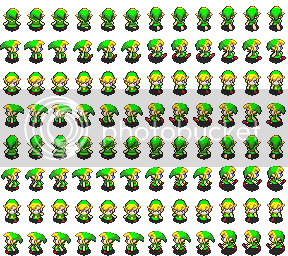 Ooooft! That looks like it's going to take a while! Think about it for a second. If the character moves up or down, they require an animation for walking up and down. If they move left or right, this can be flipped in the game engine or sprite sheet, meaning this animation really only has to be drawn one. Still, that's three sets of animations. What if I want to start adding all kinds of different attack animations? That's a hefty load of work for someone who just wants to design and program something fun. Doing the art is a necessity, but for my purposes, the art can be cut down.

Now let's look at sprites for a platform game:

That's more like it! They can be drawn and given various animations, and you only have to worry about drawing them once. They can then be flipped if facing left or right. I'm not saying platformers are the way to go all the time, but this seems logical to me for the time being!

3.) I've played so many platform games!! MegaMan, Metroid, Mario, CastleVania, Super Meat Boy, Broforce, Donkey Kong, Shank, Duck Game, Sonic, Limbo, James Pond, Bionic Commando, Metal Slug, Contra, Rayman - just to name a few! I practically have a PhD in what makes platform games fun. I have played them to death throughout my childhood right through to this current day! In picking something I'm passionate about, I can pick and choose my favourite bits and negate the things that annoy me. So I started thinking to myself: CastleVania would be cool with Sonic's speed. Super Meat Boy would be awesome with Metroid progression system. Imagine donkey Kong with Shank's intense combat experience! It's hard to run thin on ideas when it's a genre that you're generally so comfortable and at home with. All those years of wasted youth spent sat fixated on a screen, trying to beat Ridley or speed-run that extra hard unlockable level, are not actually wasted youth. All that time spent playing games is firing up your imagination and giving you all kinds of crazy and zany ideas for your own game. Stick to your strengths!

4.) This runs into the last point. I've developed a few platformers over the years and generally have a good understanding of them! I'm not bored of making them, either, so I have lots of room for innovation here!

If you're trying to think of an idea for your own game, you should throw all of these ideas into a pot and mix them up until you have your perfect game idea. If you're simply trying to recreate something, you should think to yourself, "am I pushing the genre further?". Why would someone want to play something that blatantly copies something that's already great? If you're planning on making a Sonic re-hash, but a version that cuts the content short, ask yourself why! We see this in Hollywood a lot.

They get some brilliant cult classic with incredible casting, acting and plot, like OldBoy,

then re-coat it with some magical American movie production pixie dust, and voila, it's crap: 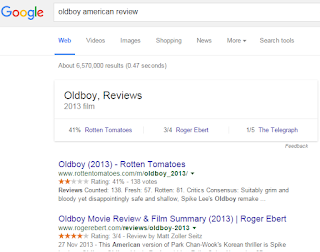 Not to say that you need to innovate the genre in some way. Purity is sometimes the best thing you can go for. But if you're making something simple, keep it tight and good in its own right!

That's all for today. Hope you learned something!